I’m Luke Rocknak and I’m from Milford, NH. My car is a 1988 Volkswagen Gti VRT aka Gwen.

It had started with me basically stalking this car on VWVortex back in September/October of 2012. I’ve always wanted a black 3 door Mk2 with big bumpers, I love the boxy body style. I ended up going down to Amesbury, MA at the beginning of December of 2012 to finally buy it. It was all original with a 16v motor and some extra parts. Ran like a top when I picked it up and stayed that way for 2 years then I wanted to start doing some motor modifications in December of 2014.

I do what I can in my driveway/garage and whatever I can’t, I bring it to DTM Autowerks in Milford. I’ve always gone to them since 2009 because of the amazing work they do.

Starting from the outside

Since it’s a black car, I thought red would be a nice touch to it. Just a few small details with because I didn’t want to take away from the black. 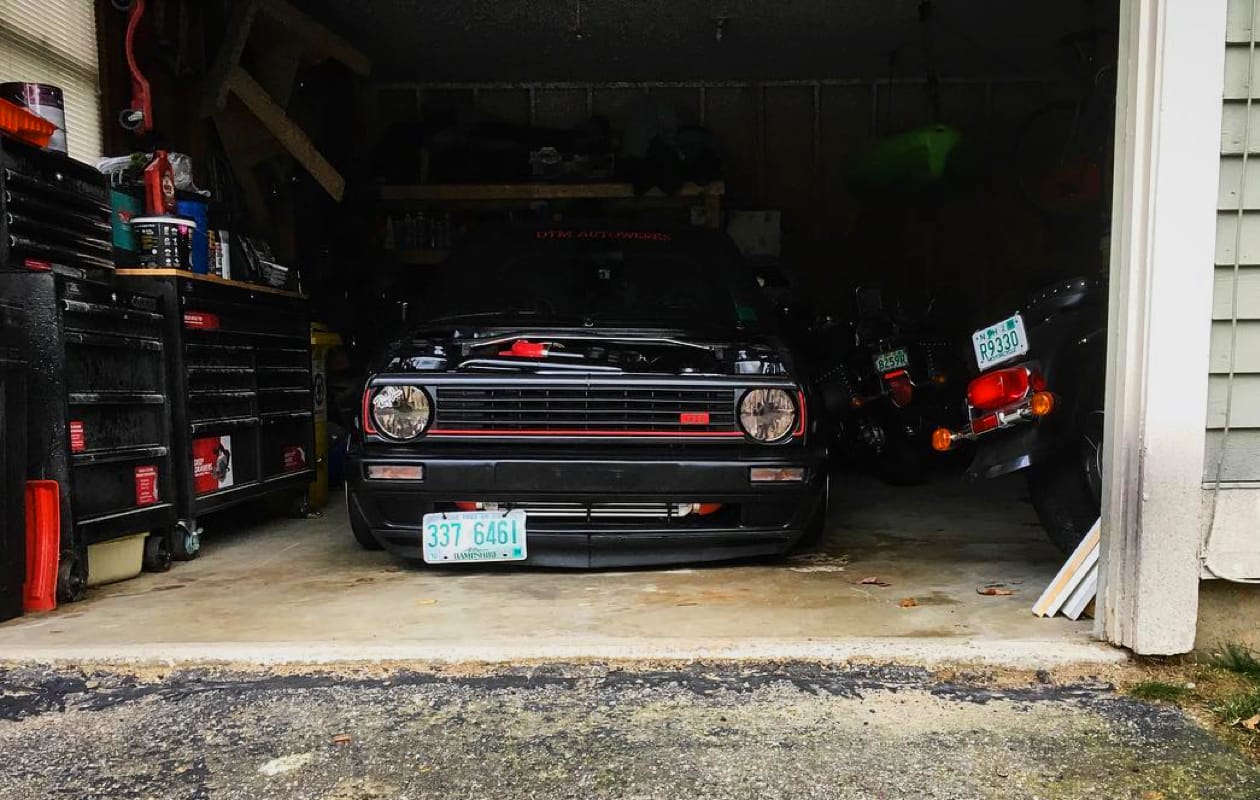 The red stripe was actually a spur of the moment thing I did in my garage at 11 pm with my buddy Nate with some 3M tape I got. I had it all black for a while and I really liked it but I wanted to try something new and I ended up loving it.

And as for the lights I wanted to smoke everything out to match with the car. So I had gotten some smoked cross-hairs for upfront and some all-black Hella taillights with the smoked markers around. 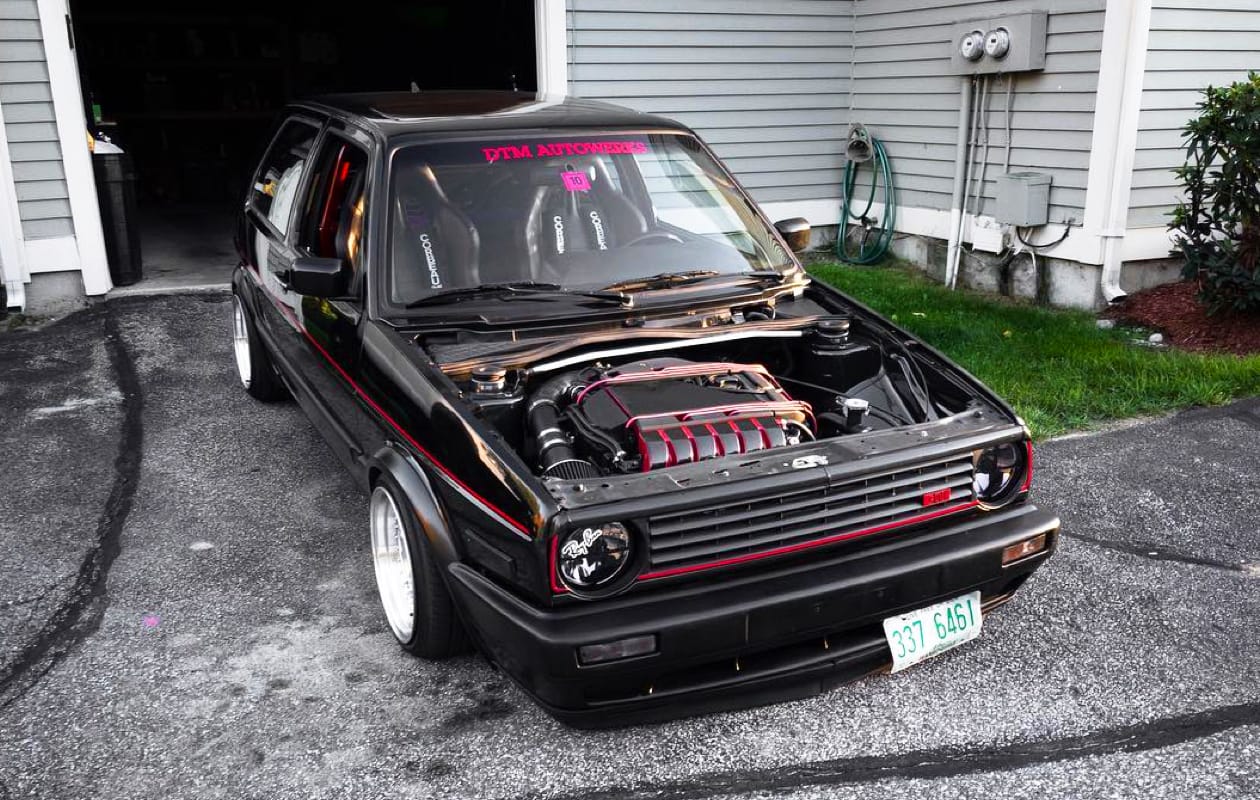 The wheels I’m currently running are Rotiform IDKs reps from JNC 15×8 ET +20 and the tires are 195/50R15s. I really liked the way they looked so I just took the leap and got them. I’m not one of those people who bitch about running real or fake wheels, to me if they look cool then you should send it.

When I got the car it had an original 16v motor and trans.

Ran perfectly fine but I really loved VR6s, so I went with that. I brought it to DTM in late December of 2014 to do all the work. We got the motor/trans from a 1996 Jetta and then the fun began. 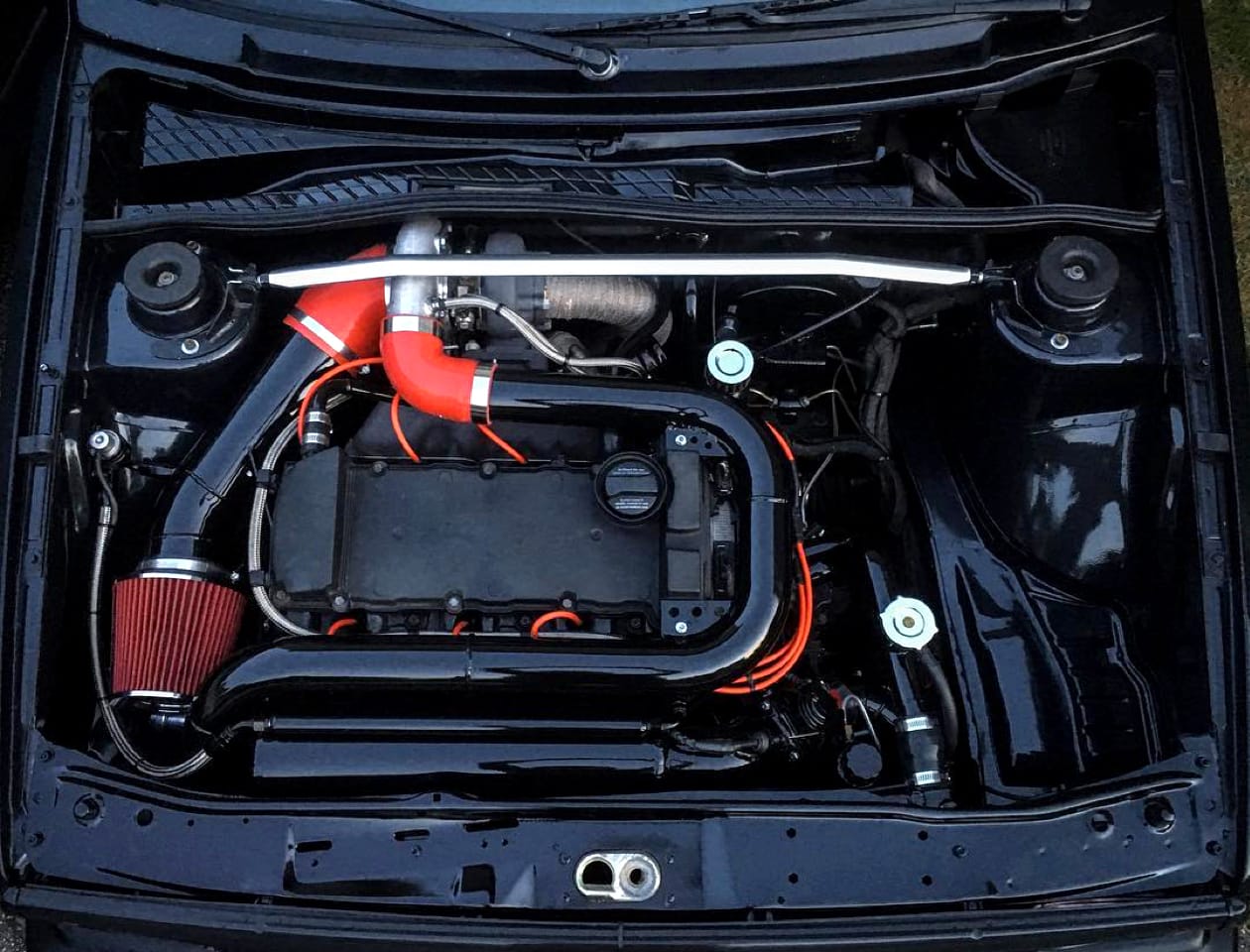 I sent the head out and had it ran through and then put a c2 chip and 262 cams in it. Went with a 2 1/2 straight pipe to a Borla exhaust, not too loud but still enough to make some heads turn. Re-sprayed the engine bay a dark grey to color match a set of BBS RMs I have. 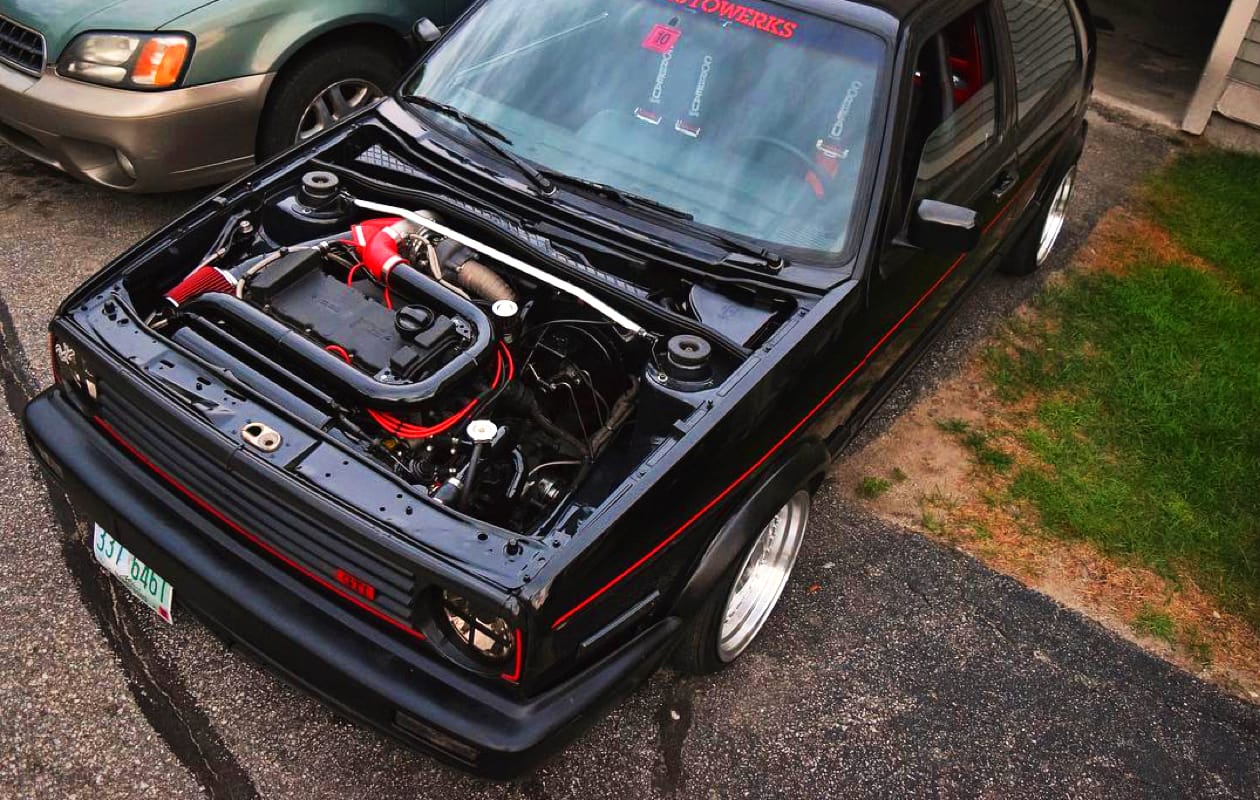 Not sure what it is making because we haven’t put it on the dyno yet, but the hp should be around the high 300s. It’s pushing 13 lbs of boost right now and that’s only half boost. The suspension I’m running is the basic Raceland reds.

How is it inside the car?

As for the interior, I loved the original seats but I had to change them to make it a little safer for the turbo build. So I took out the rear seats and the front and got some race seats that I thought looked good. Black with red stitching. 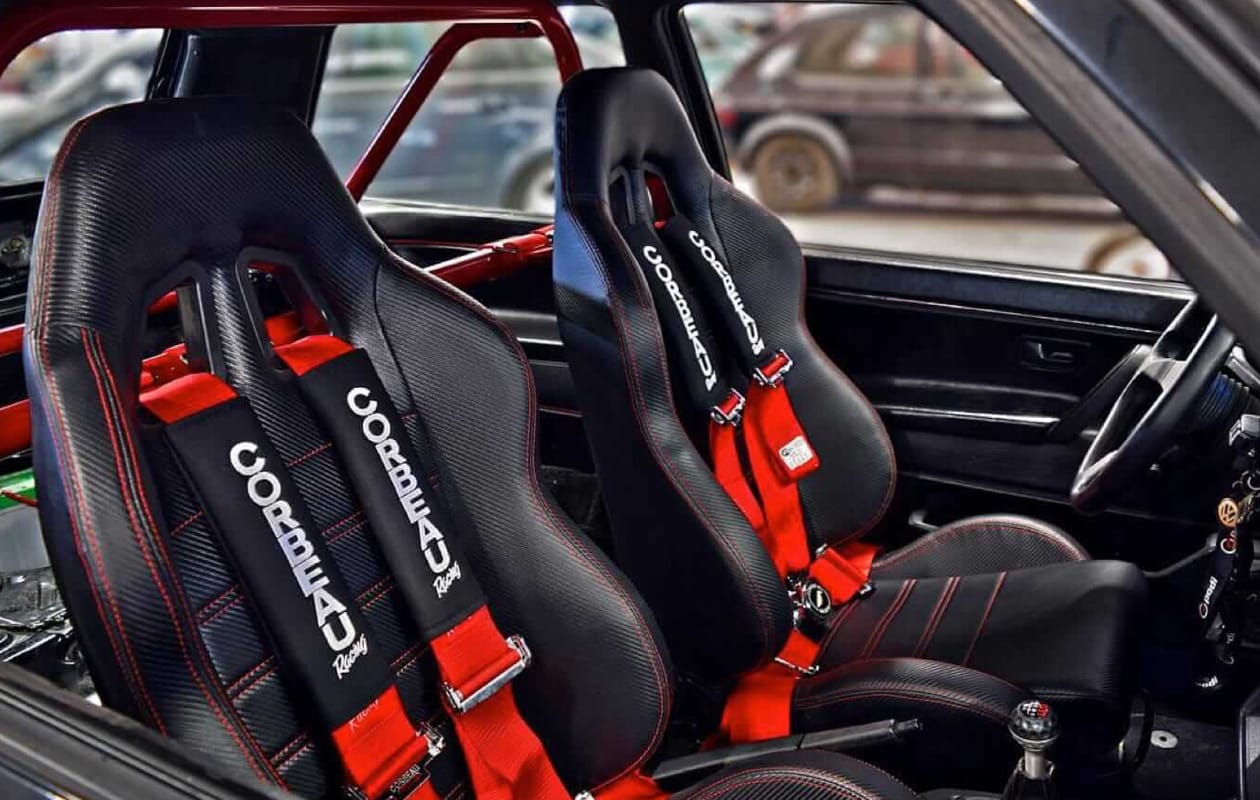 The steering wheel is Momo, and of course black with red stitching. Picked up an Mk3 25th-anniversary golfball shift knob. The front floors were re-done for the turbo build by DTM. 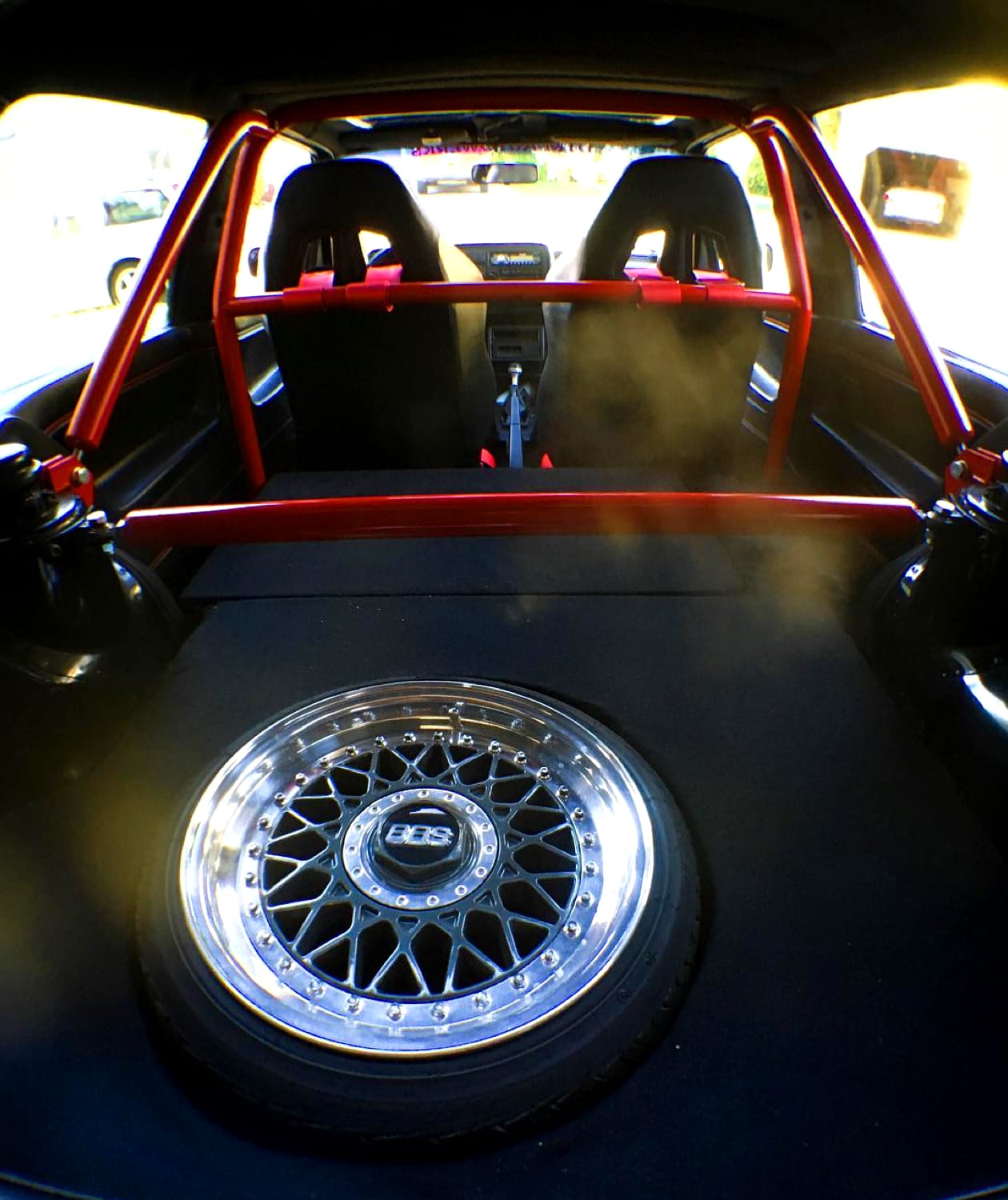 While there I got the half-cage and Corbeau harnesses installed too. After everything was installed I did the false floor for the trunk in my driveway. Just a simple black floor with a display for my spare BBS.

For where I am with the car now I think I’m content.

Maybe do a little work here and there but nothing major for right now. This is my dream car so I’m taking my time with it, no need to rush. Eventually down the road I’d like to do a respray and fix all the little blemishes it has but until then I’ll just drive it how it is, no hood and everything.

Green & Golf combining in this piece of beauty.

Simplicity and attention to detail from a whole new level. Get to know this superb, never-ending build!